LibreOffice 4.1.3 is Now Available in Your Browser: Chrome, Firefox or Safari

During the last couple of years, we’ve built a vibrant community of LibreOffice users on rollApp, including early adopters and power users. Today, we’re bringing the latest version of the LibreOffice online document management applications to rollApp platform.

The LibreOffice suite provides word processing, spreadsheets, slides and diagrams. The suite comes with a host of new features and several important improvements under the hood (you can get the full list in the release notes):

Use LibreOffice 4.1.3 in Your Browser on rollApp

These browsed-based versions of LibreOffice apps extend access to your documents directly in Google Chrome, Mozilla Firefox and Safari. And this is a big deal for LibreOffice users, since you’ll no longer have to install it on your computer, laptop or Chromebook – rollApp will let you open your files and apps right in the browser. Here’s where to get started: 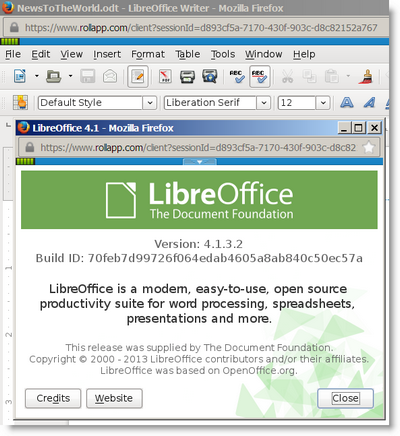 Did you know there’s a fascinating story behind LibreOffice, the free office suite?

The LibreOffice ecosystem continues to grow at a steady pace, with an average of over 100 active developers per month since February 2013. These figures tops the cumulative number of over 700 new developers attracted by the project since the announcement on September 28, 2010.

Recently, the Spanish autonomous region of Valencia’s migration to LibreOffice on 120,000 PCs, which will save the government some 1.5 million Euro per year on proprietary software licenses.